Even if you’ve never watched it, you’ve most probably heard of it – the Eurovision Song Contest. It all started back in 1956 and the event took place in Switzerland.

Only 7 countries participated in this first Eurovision and they were The Netherlands, Switzerland, Belgium, Germany, France, Luxembourg, and Italy. As Austria, Denmark, and the UK missed the entry deadline. However they join in the following year.

There were not many rules in the early days of the contest and this was prevalent in 1957, when the Italian entry lasted 5 minutes and 9 seconds. Since that song the rules changed and songs are now limited to last longer than 3 minutes.

Also, due to the lack of procedures in place if a tie-break occurred, there were actually four winners in 1969 as they all received the same amount of points. So Spain, the UK, the Netherlands, and France were all joint first.

In the following year to protest against that decision, Austria, Finland, Sweden, Norway, and Portugal refused to take part.

So a new rule was introduced that is if a country’s points are tied, it goes down to the song with the highest votes from the highest number of countries will wins the competition.

Before 1971, there were only solo or duets allowed to compete, but this changed when it was decided that a country could choose to have a group of up to six performers on stage.

In 1974, the United Kingdom gave nul point to ABBA who sang Waterloo. ABBA went on to with the contest at Brighton in 1974 and have become the most successful Swedish pop, despite officially splitting up in 1983.

In 1979 the Eurovision contest was held outside Europe, in Jerusalem.

In 1986, the youngest contestant who won the Eurovision was Belgium’s Sandra Kim, she was just 13 years old, but claimed to be 15. After other countries such as France and Israeli also entered children into the Eurovision, this rule was also changed. After the 1989 Eurovision, contestants had to be older than 16 on the date of the final.

In 1997, televoting was being phased in and although the outcome still exists, it is now determined by a 50:50 combination of both the national jury and televoting to decide on the winner.

Oddly enough, when there is a tie in the national jury votes it is the youngest member who gets the final decision.

Whereby if there’s a tie between the jury’s score and the televoting score, it is the country with the most televotes who wins.

Up to 40 countries can enter and compete in the semi-finals for a place in the final. However, only 26 countries are allowed to move forward into the final competition.

There are actually six countries that do not have to compete in the semi-finals as they have guaranteed places.

These include Norway, France, Spain, Germany, Italy, the UK. The previous year’s winner also gets a free pass to the final.

Australia were invited to participated in the Eurovision Song Contest in 2015 in Vienna. Australia is the first country from the Oceania region apart from Morocco in 1980) to take part in this contest.

The country that has won the most Eurovision contests is Ireland, having won the competition on seven occasions.

Johnny Logan won the Eurovision Song Contest three times. He represented and won for Ireland in 1980 and 1987 as a performer with “Hold Me Now” and “What’s Another Year”.

On the other end of the scale, Norway have scored “nul points” the most times and has happened four times for Norway!

Norway have come last ten times, and this is the most any country has ever lost.

The Eurovision show is always presented in both English and French. The rules are also written in both these languages too, but if there is a linguistic dispute between the two versions of the rules, the English version wins.

There have been 18 female solo artists winners compared to just 7 men.

Quite simply it’s when we change the clocks to go forward for one hour on the final Sunday in March to signify British Summer Time and back one hour at the end of October.

The clocks going on one hour in March enables us to have more daylight in the evening.

It all started at the beginning of the 20th Century with a proposal from a British builder named William Willett, who happens to be the great-great-grandfather of Cold play’s Chris Martin.

The National History of Science at the Royal Observatory Greenwich stated that Mr Willett was incensed at the waste of daylight during the months of Spring and Summer.

As he was riding his horse through the Chislehurst and Petts Woods he was aware that many people were sleeping on even though the sun had been up for hours.

In 1916, British Summer Time was adopted to enable us to save fuel and money and get out in the sunshine for longer to improve our health.

Britain has thought of moving the clocks a number of times, even to the extent of forwarding the clocks by two hours ahead of GMT during the Second World War.

They have also been periods when the clocks were brought forward in the spring of 1947, which was to help with fuel shortages.

Britain even tried to experiment with keeping the clocks one hour ahead of GMT throughout the years of 1968 and 1971.

But they reverted back to our system of winter and summer times in March and October.

The ideas for clock-changing were first noted by Benjamin Franklin, one of the founding fathers of the US, in 1784.

He wanted to try and save candle usage and get people out and about to benefit from natural sunlight.

Then in 1895, over 100 years later, George Vernon Hudson a New Zealand entomologist suggested clocks be put forward two hours in the summer.

So the primary reason we use Daylight Saving Time is that people can simply enjoy long summer evenings in natural light, better for your health and energy conservation.

All of the quoted times for DST are in United Kingdom Time.

The largest cut diamond is known as the ‘Star of Africa’, a pear shaped Cullinan diamond, which is 530.2 carats. 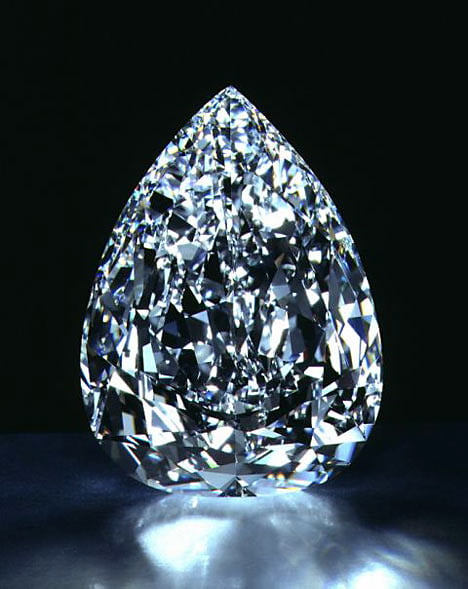 It is set as the main stone in the majestic Sovereign Sceptre with the Cross.

The Cullinan Diamond was the largest rough diamond ever found and weighed in at 3,106.75 carats.

The rough diamond was discovered on 26th January 1905, at the Premier No. 2 mine in Cullinan, South Africa. It was named after Thomas Cullinan, who was the mine’s chairman.

In April 1905, the large gem quality stone was put on sale in London, but it was never sold.

Then in 1907 the Transvaal Colony government bought the Cullinan and gifted it to Edward VII, King of the United Kingdom.

It was then sent to be cut by Asscher Brothers in Amsterdam.

The Cullinan produced 9 stones of various cuts and sizes. The largest, named Cullinan I or the Great Star of Africa, weighs in at an impressive 530.2 carats and is the largest clear cut diamond in the world.

Then you have the second-largest, called Cullinan II or Second Star of Africa, and this is placed at the front and centre of the Imperial State Crown and weighs 317.4 carats.

Seven other major diamonds, weighing a total of 208.29 carats are owned by Queen Elizabeth II, who inherited them from Queen Mary, after her grandmother died in 1953.

They vary in shape and size and make up a necklace, brooches, earrings and even a pear shaped ring.

The lyrebird can usually be found in areas of the rainforest in Victoria, New South Wales, and south-east Queensland, Australia, and it was also introduced to Tasmania in the 19th century.

The lyrebird’s name derives from the fact that the male bird has an extraordinary tail and has 16 highly varying size feathers.

These consist of two long slender lyrates in the middle of the plume, surrounded by two broader medians on the edges and finished off with twelve filamentaries positioned between them.

It is thought to resemble the shape of the lyre, a Greek musical string instrument.

A lyrebird is most known for its superb ability to imitate natural and artificial sounds from around their environment.

The lyrebirds sings mostly during the winter when it’s breeding season.

Like most songbirds, male lyrebirds learn their songs and even mimic other sounds, from older males rather than directly from their mimicked models.

The lyrebird can accurately mimic the sounds of the surrounding forests. With most lyrebird mimicry of other bird species such as songs, wing beats etc.

It is also known that the Lyrebird can mimic other items, like camera clicks, chain saws and even car horns, to name but a few.

The extremely striking beauty of the male bird’s large tail feathers is spectacularly fanned out during a courtship display.

Lyrebirds have unique plumes of natural coloured feathers and are one of Australia’s best-known native birds.

The female’s tails reaches 75-85 centimetres in length, compared to the impressive males tail which reaches 80-98cm in length.

Also, unlike the Emu, the lyrebird can fly, but it rarely does. Choosing instead to run quickly to avoid most dangerous encounters.

Lyrebirds like living in forests as they feed mainly on ground-dwelling insects, like spiders, frogs, and other small invertebrates.

This is the reason they have powerful legs with long claws, making it perfect for raking through the large amounts of foliage, leaves and soil.

Although Lyrebirds live on the ground they actually spend their nights sleeping high up in trees.

You can also find the Lyrebird’s picture on the side of Australia’s ten cent coin.

A super snow moon is when the moon is both at its fullest and and its perigee, which means the point in the moon’s orbit when it’s closest to Earth.

The super snow moon tends to occur during the month of February and was given its name thousands of years ago by Native Americans as that is when they had the most snow fall, it has also been known by the name, Hunger Moon and Storm Moon.

Because of the distance between the moon and Earth at this time, the moon appears 14 percent larger and around 30 percent brighter in the sky.

The moon’s orbit isn’t a perfect circle, it’s more egg-shaped and this is due to forces of gravity from both the sun and the Earth. This means that the moons distance from Earth varies throughout the year.

The best time to photograph or look at a super moon is when it rises in the east or as the sun is setting in the west. This is when the moon will appear to be at its biggest, although this is a kind of optical illusion.

Astronomers say that the illusion is caused by objects such as trees and buildings in our line of vision tricking our brain into thinking the moon is closer to these objects than they actually are, making the moon appear much larger.

On the other end of the scale, the point in its orbit when the moon is furthest away from Earth is known as the apogee,and this makes the moon appear much smaller in the sky.