You are here: Home / Sport / Swansea City in the Premier League 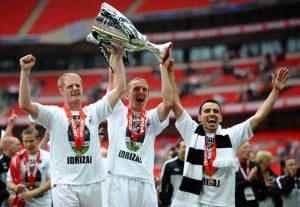 In fact they were the first Welsh team to ever play in the Premier League after beating Reading 4-2 in the 2010/11 Championship Play-Off Final.

A Scott Sinclair hat-trick ensured that the Welsh club returned to the top flight of English football for the first time since 1983 – when it was known as Division One.