You are here: Home / Learning / Who invented the Rubik’s Cube?

The Rubik cube was invented by a professor from Budapest in Hungary named Ernõ Rubik. The invention of the ‘Magic Cube’ was to help his students understand three-dimensional problems.

Ernő Rubik was born in Budapest, Hungary on 13 July 1944, during World War II. His father, Ernő Rubik Sr. worked as a flight engineer at Esztergom aircraft factory and was a highly regarded engineer of gliders, whilst his mother Magdolna Szántó, was a poet.

During the years 1958 to 1962, Rubik specialised in sculpture at the Secondary School of Fine and Applied Arts. Then he went on to attend Budapest University of Technology between 1962 to 1967.

He became a member of the Architecture Faculty and finally finished his education at the Hungarian Academy of Applied Arts from 1967 to 1971. Whilst here he became involved in the Faculty of Interior Architecture and Design.

In 1974 Ernõ started working on a prototype of the magic cube, thus showing his architecture students a moveable art piece. 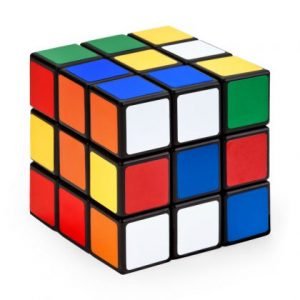 The cube was fairly large and made from wood, with corners that were cut down due to the size of the object. It was very robust yet it twisted and turned without breaking. He then added 54 coloured stickers to the six sides of the cube.

When Rubik first designed his cube it took him over a month to solve it. It was known in Hungary at the ‘Buvos Kocka’ or ‘Magic Cube’ in English.

In 1975 Rubik received a patent in Hungary for his ‘Magic Cube’ as a puzzle. The name Magic Cube was kept for the following 5 years before being renamed Rubik Cube after its inventor Ernõ Rubik.

Following on from this in 1977, the ‘Magic Cube’ was manufactured in small batches as it became popular in Hungary in the late 1970s. Unfortunately due to Hungary being a communist country, the controls on imports and exports were tightly controlled and therefore made it difficult for Rubik sell outside of Hungary, so he started to demonstrate his puzzle at toy fairs.

After a few years of promoting his ‘Magic Cube’ at a variety of international toy fairs, which including London, Paris and New York. His puzzle was finally spotted in September 1979, in Nuremberg by the toy specialist Tom Kremer. Seeing the potential of the puzzle cube, Tom Kremer wanted to commercialise the cube and sell it worldwide.

It took a few years before the cube was released worldwide, due to the “Iron Curtain” communist regime. But in between patent receipt and release the Cube finally started to get distributed across the world.

1980
In 1980, Tom Kremer convinced the Ideal Toy Company to distribute the “Magic Cube”. But they wanted to change the name of the product and so the global launch took place in 1980 with the new puzzle named Rubik Cube. The newer Cubes were designed to be much lighter and therefore it made it much easier to move, which in turn made it faster to solve.

A man named David Singmaster published the first problem solving Rubik Cube book in 1980 and some still use this book today. Following on from this a 12 year old boy, Patrick Bossert, released a book, ‘You Can Do the Cube’ in 1981, this was hugely popular and sold more than 1.5 million copies.

1982
In 1982, the first Rubik’s Cube World Championship was held in Budapest, the capital of Hungary. 20 competitors took part, all of whom were selected from smaller competitions in their home countries and came together to solve the Rubik’s Cube in as fast a time as possible.

The victor was Minh Thai, an American teenager, who solved the cube in 22.95 seconds. He then later published a book entitled “The Winning Solution”, which also taught others how to solve the Rubik’s Cube. The Ortega Corners-First method that is still used by some today was based off of Thai’s book.

During the same year, the Museum of Modern Art in New York added a Rubik’s Cube to its permanent collection.

During the next two decades, as the World began to move on to different toys and inventions (especially with the daily technological advances that hooked the attention of the World), the Rubik’s Cube faded from the public view. It still remained on the shelves and still sold incredibly well, but the hype that originated back in its starting years had pretty much died off.

The cube did make occasional appearances in the news, however, such as the Masterpiece Cube that was created in 1995 by Diamond Cutters Int. Valued at $1.5 million, it is the most expensive Rubik’s Cube in the World.

However, as the Rubik’s Cube became less of a common sight in Christmas wish lists, speed cubing was born and began to thrive

1990
Ernố Rubik is named President of the Hungarian Engineering Academy.

In 1997, Jessica Fridrich published her methods for solving the Rubik’s Cube online. The Fridrich method (also known as CFOP, an acronym for the stages of the puzzle) is regarded today as the best speed cubing method, and the world record single and average times have been held by Fridrich solvers for many years, despite Fridrich herself estimating that the method would not be efficient for consistent times under 13 seconds.

In 2003, Ron Van Bruchem and Tyson Mao founded the World Cube Association (WCA). This was the first official organisation that would be responsible for the running of official speed cubing competitions and monitoring of national and international achievements.

The WCA has helped grow speed cubing and has taken the hobby to many new countries. The organisation is recognised as the official speed cubing association and any potential World Records must be set under WCA regulations and delegation before they are recognised.

In this year, the second World Championship took place. Dan Knight was the victor this time, winning with a time of 20.00 seconds.

The cube celebrated its 25th birthday in 2005. A special edition cube packaging was created to celebrate. Also during this year, the third World Championship took place. In this one, Jeans Pons won with a time of 15.10 seconds.

2007
Ernő Rubik awards prizes at the World Championship in Budapest.

2013
A new cube is born featuring a faster mechanism and tough durable tiles.

An interactive Rubik’s Cube doodle was released on the front page of Google on the day, and the Beyond Rubik’s Cube Exhibition was opened at the Liberty Science Centre in New Jersey, the same venue as the 2014 US National Rubik’s Cube competition.

The exhibition displayed everything cube related from robots that could solve the puzzle to original wooden prototypes from Rubik himself.

2017
The Rubik’s Speedcube is created!

The World Championships and European Championships are still held every 2 years (each taking place on different years), along with the yearly US Nationals.

These events still consistently bring together hundreds of speedcubers and, whilst many don’t stand much of a chance against the world’s best, friendships are formed and the events are always huge successes.